Wishing the People of Poland a Happy Election Day 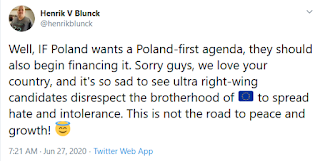 Today is Election Day in Poland. It will be interesting to see how the people of Poland will vote today. As a member state in Europe it would be preferable if they chose a leadership that is willing to invest in being part of the European Union. Rumor has it that the ultra right-wing nationals are leading in the polls, and that is rather sad when seen from a European perspective.
Peace requires all nations to come together, and countries such as Hungary, Austria, Romania and Poland have each their animosity towards Brussels and Strassbourg. I wrote the following tweet this morning:

Well, IF Poland wants a Poland-first agenda, they should also begin financing it. Sorry guys, we love your country, and it's so sad to see ultra right-wing candidates disrespect the brotherhood of the EU to spread hate and intolerance. This is not the road to peace and growth! [link to tweet: https://twitter.com/henrikblunck/status/1276747578617495552?s=20]

Poland - A Nation That Has Lost Its Historical Understanding

In my view, and I know some may disagree, I think it is important to remember where they were before the Berlin Wall came down. As a satelite nation under Soviet Communism, it suffered greatly until Mikhail Gorbachov came on the scene.
When Solidarity rose as a popular movement, things began to change, and Poland is one of the nations who has enjoyed great economic growth from the European Union. That sense of gratitude is somewhat disregarded when politicians claim homosexuality is worse than Communism.
Not only is that view intolerant, it is also highly ahistoric when compared with what actually happened until the Berlin Wall came down three decades ago.
I fully recognize that as a Dane I don't have any say in what the Polish people choose to do on Election Day. But I do hope the polls are wrong, as I do think we should have greater tolerance towards all people all over the European continent. It is easy to agree with people with whom you fully agree, but we need more tolerance in a European Union where 27 nations need to co-exist with all their national differences at least aligned with common ground and tolerance at the forefront.
We can do so much more when we work TOGETHER, and even though many nationalistic movements try to speak a 'Brexit-agenda' in the belief that standing alone was somehow better, I think most people can acknowledge that this is a both naïve and false claim...
Happy Election Day to all. :-)
Posted by Henrik V Blunck at 12:01 AM