What Will Republicans Do After Trump Is No Longer President? 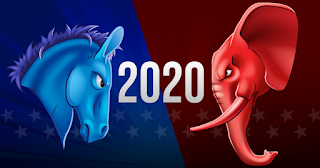 When I was young, Ronald Reagan was President in America. His legacy grew quite big. We Danes all remember how Danish politician (and former Minister of Justice) Søren Pind and many others have spoken quite highly of him, even though his critics - obviously - considered him to be quite tough.


It is well-known that many things change over time. We all remember the past with nostalgic longing - at least in some areas… 🙂

As I have written numerous times on my blogs, then both religion and politics are areas where we can easily be quite fierce. It awakens emotions, and emotions are rarely rational.

On this sunday, I will however share a thought about American politics that I have thought of numerous times since Donald Trump came into office on January 20th 2017: what will Republicans do when Trump is no longer President in America?

Regardless of whether Trump gets one or two terms, he has moved quite a bit of the fixed beliefs we have previously held as constant values for our civilised part of the world.

One of those constants was that America never negotiated with dictators. This is exactly what happened when he met with Kim Jong-Un of North Korea in Vietnam. Another constant, which actually began when Ronald Reagan began speaking with Russian President Mikhail Gorbachev was that we should work WITH Russia. When Bush declared war on terrorism after the 9/11 attack on the twin towers in New York, it quickly became clear that the 'enemy' was no longer to be seen as an East vs. West, but a war on terrorists who wanted to destroy the free and democratic values in this world.

Recently we have seen that Trump - because there is a suspicion of Russian involvement in the 2016 elections - doesn't talk with Russian President Vladimir Putin. Probably because he doesn't want to be considered 'a bit too friendly with the Russians' even though it would actually be of great importance in Syria where we can see opposing interests...

To put it bluntly, the problem is that Trump has spoken with so many tongues - and changes his mind so many times - during the last two years that you can't RELY upon America anymore. This is a challenge for the free world. When Republicans clap at words from Donald Trump, you could fear that Republicans will have an identity crisis once Donald Trump is no longer President in America.

American Republicans are in a catch-22 situation. Tradition bids that Republicans present the sitting President as their candidate for the coming elections, because he is Republican. But how many actually feel as the late Senator John McCain? How many would actually prefer another candidate? Who could they pick? The people who are at the top of the Republican party are all standing in awe and applause for a person who has dismantled everything we have formerly associated with being Republican…

I am so happy I am not an American, because I couldn't keep silent on this if I lived over there.

What are your thoughts about the future of Republicans in America? Think about it. It can never hurt to think a bit forward - just as in chess, where you should be a couple of draws ahead if you want to be could at playing this strategic game.

Wishing all readers a happy sunday. 🙂
Posted by Henrik V Blunck at 9:16 AM